This article dated 24th August 2016 shows the depth of misinformation deliberately spread by organisations present in the illegal squat and the approved respected organisation 'Active Life' wanted to respond in this article which has not been reported in the UK much. Its amazing the hard work with little thanks are put in by this facility and its volunteers. I have to ask - If qualified official help is being provided is it time for the UK charities to concentrate on the migrants already in the UK?

Here is text from article - 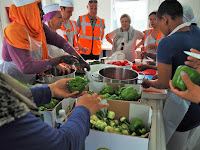 Questioned by associative describing endless queues at the distribution of meals at the reception center for migrants Jules Ferry, the association The Active Life, which manages it, wanted to respond to criticism . And invited the local press to come to see for herself the "effectiveness" of the device ...


On August 10, the association Auberge migrants pleaded before the Lille Administrative Court against the businesses of the closure of the "jungle" (*).His strong arguments that these migrants avoid restaurants "to queue for three or four hours," the Jules Ferry center to get a meal . About one that is wrong with the association La Vie Active, in charge of the distribution of meals . Its director Stéphane Duval said he was " annoyed " by " this spiel ": " We have the right to have an ideological struggle, but spread misconceptions, it is unbearable. "

Stéphane Duval, distribution of meals is " much better managed today than a year ago, when we served 2000 meals. So we almost doubled the number of meals . " Several measures have been adopted to improve the system, he explains: " We changed the system: now the line is doubled , which allowed us to reduce the safety device. It distributes plastic bags from the queue, to save time. "Upon arrival, two rows of employees and volunteers distribute meals.Among them voluntary migrants are involved. A priority line was also created " there about three weeks " for minors, the vulnerable and the elderly, which must have a personal card with photo to be able to pass.

In response to criticism, Stéphane Duval invited the local press to come and see for itself the situation. And indeed, when the queue already seemed long at 15 h 15 (distribution started like every day at 15 pm), we could follow a refugee, who set 35 minutes before serving . The distribution ends at 17 h 45 and we however could not see if it was as quick to that time.According migrants interviewed on site, waiting would not exceed one hour .

-. A device ready to expand the API company, which prepares meals, has acquired an additional furnace, and will soon have a cold again. Active Life expects that the number of meals further increases in the coming weeks: " We will adapt ., Assures Stéphane Duval If 2 hours 30 distribution are no longer sufficient, we will increase the schedule ."

Since the beginning of the year, tickets are distributed to migrants who want to take a shower, with specific time slots. The wait time is about 20 minutes, according to The Active Life. 600 showers are taken each day. The center has 60 showers 50 others should be installed by the end of the year.

The operating budget of the Jules Ferry central and interim care center (CAP) amounted to € 16 million for the year 2016, according to Stéphane Duval.

The isolated juvenile facility doubled in 2017?

A center for minors of 72 seats will be built on the parking lot of the Jules Ferry center by November. Its capacity could be doubled from the beginning of 2017, says the director of The Active Life.

Since May, a converted bus parked in the Jules Ferry center. It houses the NGO Elise Care, which offers alternative medical consultations for migrants. Sixty migrants will consult every day.

200 employees at the Active Life
According to Stéphane Duval, the number of employees hired by La Vie Active Jules Ferry (all structures) is expected to reach 200 by the end of the year.

Source of news - a selected direct translation via google - E&OE