United Nations (UN DESA) Building Food and Water Security in an Era of Climate Shocks Building a Global Coalition for Sustainability after COVID-19
It was great to be able to take part in the UN DESA Global Policy Dialogues for Climate Action Wednesday, 24 March 2021. I have been on the UN FAO Forum member for a number of years so it was kind to get an invite to part of this even in a small way.
Read more »
No comments: 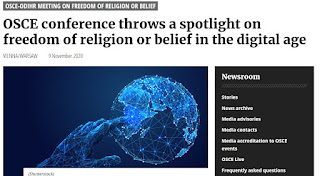 VIENNA/WARSAW 9 November 2020
It was good to be able to take part again in this OSCE meeting on behalf of the MT, although it was hard logging in to zoom this time and quite a few technical issues, however it was good to hear views from others. Here is a writeup from the OSCE website.
Read more »
No comments: 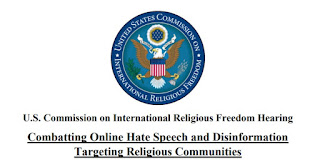 USCIRF - It was good to be a part of the U.S. Commission on International Religious Freedom Hearing hearing that took place in October it was about how some governments use and enable others to use social media platforms to sow disinformation and hate speech that target religious communities and incite violence against them.
During the past two decades, Facebook, Twitter, and other social media platforms have emerged as invaluable tools for connecting people around the world. However, we have also witnessed the use of social media to spread false and discriminatory information that dehumanizes specific groups of people, including faith communities and religious minorities. Online hate speech and misinformation has been
used to target and mobilize violence against the Rohingya in Burma, Jews in Iran, Shi’a Muslims in Saudi Arabia and Pakistan, and Christians and Muslims in Nigeria, to name only a few.
Read more »
No comments: 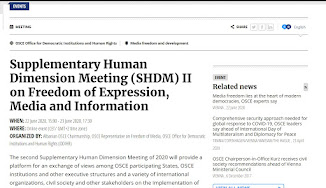 In July I took part in the OSCE Conference: Human Dimension Meeting (SHDM) II on Freedom of Expression, Media and Information. This was a two day event that was held online. This was the first time I have taken part in a online conference and found it surprisingly easy.
The OCSE were kind enough to send me a practice instructions to try out the day before the conference was started. Being able to communicate with the host was easy as well.

The Conference was organised by the  Albanian OSCE Chairmanship, OSCE Representative on Freedom of Media, OSCE Office for Democratic Institutions and Human Rights (ODIHR)
Read more »
No comments: 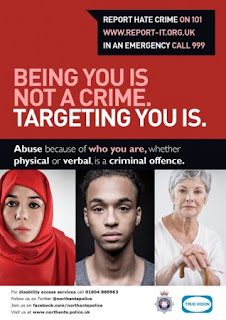 
I hope to be part of a new investigatory report starting this year:

On 27 March 2018 the joint House of Commons/House of Lords Committee on Human Rights (chaired by Harriet Harman QC MP) released its report on freedom of speech in universities.